Today has just been one of those really wacky, weird days. Lots of curve balls, running around, non stop! Well, non stop until the fire alarm sounded as soon as I sat down for a weekly meeting.

Im sure every office is the same in the respect that when a fire alarm goes off, there is hesitation like, “do we really have to get up?,” or “do you think it’s real or just a test?” Well we did the same thing until we heard the announcement it was time for us to all head outside. First lesson quickly learned: change out of high heels before attempting to go down 17 flights of stairs. Wow!

So it’s really such a gorgeous day and it’s not bad waiting outside bit I quickly realized I left my gym bag at my desk and it didn’t seem as if we were going back in so that was my immediate justification of not going to the gym tonight. However, a group of us headed to lucys (after we were released for the day of course) and I realized summer is quickly approaching and I shouldn’t let myself out of going to the gym that easily.

After having an amazing margarita in the nice breeze, I headed back to see if they were letting us back into macys. I was lucky to get up to my desk, grab my stuff, including flat shoes and my gym stuff, in time to catch an early bus. So I thought…

To make a long story short, I decided to grab a bite before my spin class tonight and I’m so happy I stumbled upon Toyama Sushi I’ve been here before but never had their version of the Mexican roll- off the charts!!

Spicy tuna, shrimp tempura, avocado, jalapeño, yellow soy bean sheet with eel sauce. (now you can see why I have to drag myself to the gym) Anyway, I highly recommend this roll it is ah maze ing!!

Then I finished my meal off with green tea Mochi ice cream, just learned the name tonight, and I’m leaving extremely satisfied! I love spring, and sushi and getting out early! Now I’m pumped for my spin class, bring it on! 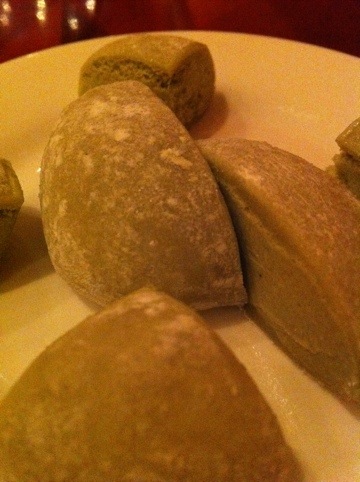 Pleasantly surprised with this afternoon:)